In September 2020 it was announced that MCG had commissioned an artist to create a new sign for Marcham Centre. Suzanne O'Driscoll is a local artist who has worked on many public art projects around Oxfordshire. To read more about Suzanne and her work see further down this page or go to her website suzanneodriscoll.com Suzanne did a great deal of research about Marcham. She worked to create a fantastic design that incorporates memorable places and objects in and around the village, historic as well as contemporary. It is made of 5mm thick stainless steel and the reverse side will look equally good. The sign is 3m wide and 1.5m high and raised up on 0.5m legs making it 2m high in total. 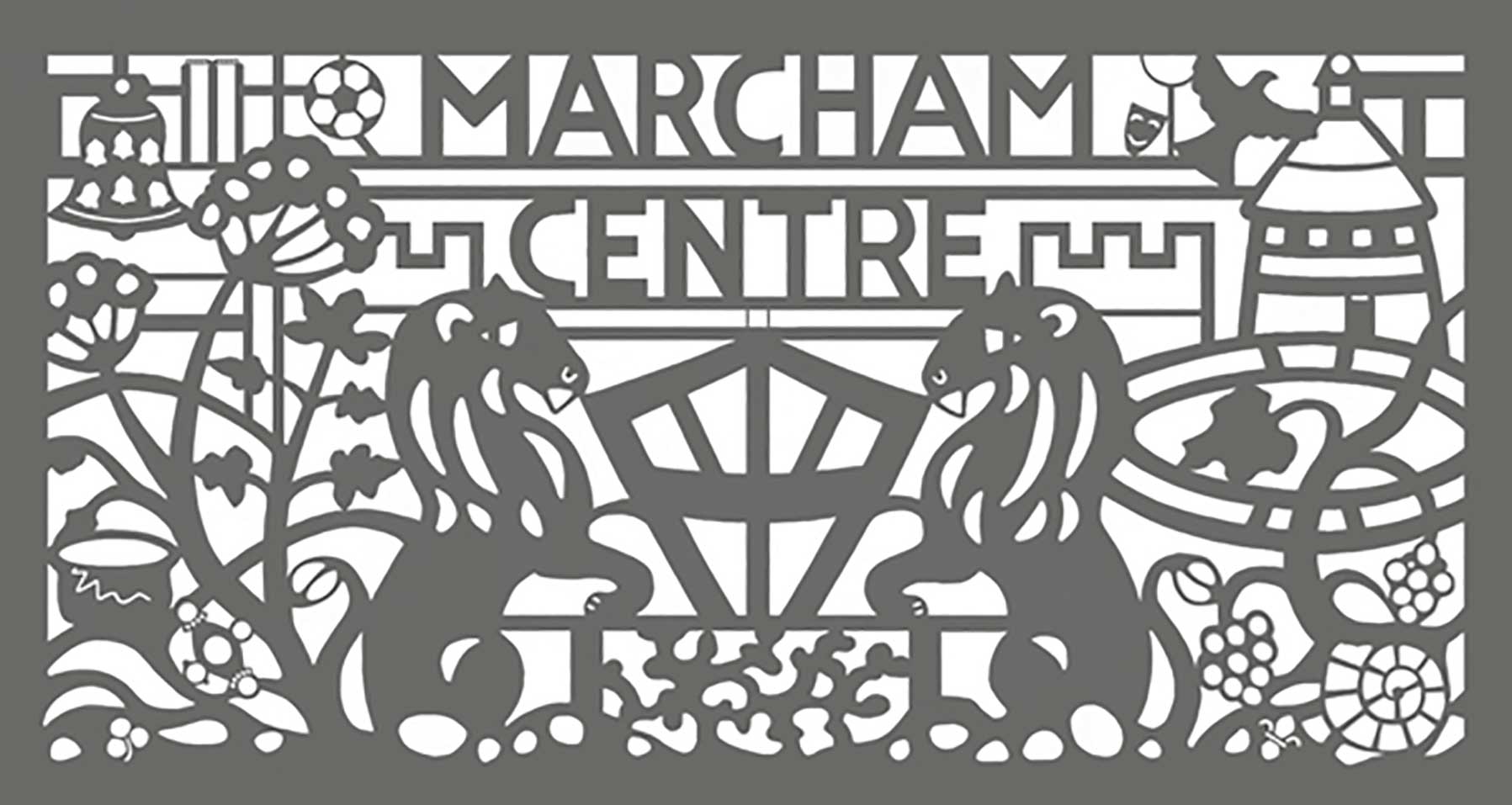 This is a mock up of the sign in position at Marcham Centre. 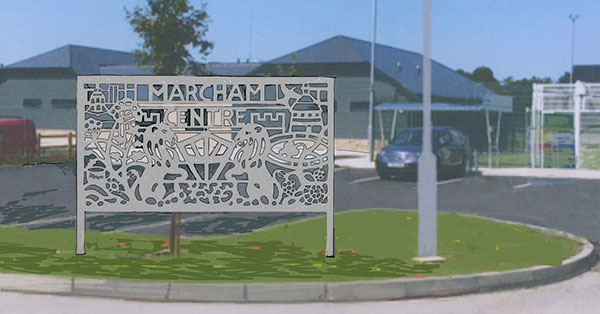 During November 2020 the design was available for comment by everyone. The design was also displayed in Marcham Village shop and comments and questions could be left there. There was an opportunity to take part in a conversation by Zoom on Tuesday 10th November at 7.30 pm with Suzanne O'Driscoll. Comments were also sent by email projects@marchamcentre.org. Village groups and organisations were also contacted for their comments.

The design was revised in line with the Zoom meeting and other comments to include four new symbols and the descriptions included below.

Here the video about the artwork and how Suzanne chose the imagery. 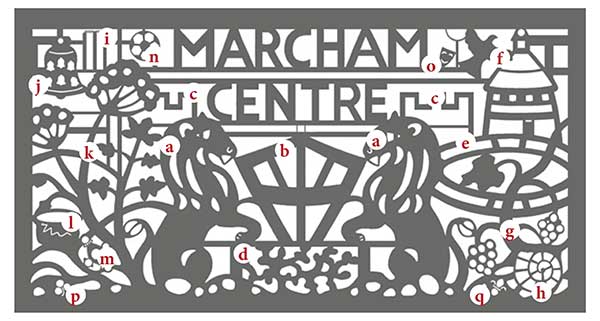 Each element was carefully chosen to represent an area of Marcham:

The old village Institute has had two iconic lions outside for as long as anyone can remember. They will both be revealed again once the building conversion is complete.

b Shield in between the lions

This represents several organisations in Marcham: the Football Club, the Cricket Club and Marcham Primary School.
The Football and Cricket Clubs shield uses its own village 'icons': the church bells, the wild celery, a dovecote, a cricket ball and an important memorial bench* (see i Cricket Stumps below).
Playing football in the village since 1913 and members of the North Berks League since 1946, Marcham Football Club currently has two teams playing on Saturday afternoons throughout the season.
The Cricket Club has been in the village for over 100 years and has two teams playing in the Oxfordshire Cricket Association League.
The shield was designed and produced by members of the cricket and football clubs in consultation with the Hill family as a fitting tribute to Graham (hence the GH on the bench of the shield). The shield and its composite items are therefore treasured and very important to the Hill family.
Marcham C of E Primary School also use a shield as its badge illustrated with the celery after which Marcham is named. There has been a school in the village since 1870, originally in Mill Road and since 1966, in Morland Road adjacent to Marcham Centre.

The castellations represent part of the old Institute building as well as part of All Saints' Church.

d Coral in the warm waters of pre-history

As the Corallian Ridge between the rivers Thames and Ock was once under the ocean, it still contains seasalt - so the water that seeps out creates salt springs which is the preferred environment for Sea Celery. From the Iron Age these plants were valued for their healing properties and in Roman times were probably associated with the Temple site at Frilford.

The amphitheatre at Trendles was once thought to be a sacred pool but the formal entrances, 'royal box' and decorated plaster walls suggest otherwise. It is unusual because it is associated with a religious site when normally amphitheatres are found in military or civil settings.

Several of the main Abingdon abbey servants also held lands in the village including the cordwainer and the master cobbler. They were kept well fed by the livestock in their dovecotes of which there were once seven in Marcham: two remain. The dovecot is also used as the logo of Marcham's Women's Institute.

The Bothy vineyard of six acres is sited on a patch of ancient green sand which drains easily and is good for white wine.

The ammonite, Perisphinctus pickeringius, symbol of the Marcham Society, is a local geological reference. The original named specimen was found in Marcham. Local Corallian limestone contains many such fossils.

These of course represent Marcham village Cricket Club. The Cricket Club was formed in 1906 and has been located in the cricket field since then. The Anson family were very supportive of the formation of the club.
The bench*, as you probably know, is dedicated to Graham Hill, which was personally made by Tom Ricketts and has included Graham's cricket bat; a match ball; and other relevant pieces. This was positioned in the field and is currently in the garage awaiting a suitable positioning, along with the millennium seats.

All Saints, Marcham is unique in having six bells. They are hung a little unusually in an anti-clockwise sequence. The bells were originally mounted in a wooden frame that dated from mediaeval times. In 1988 they were re-hung in a metal frame and refurbished.

Marcham, the name from merece and hamm, means 'Wild Celery covered Water Meadow'; after the Sea Celery which still grows in the salt marshes between Marcham and the River Ock. Where salt water appears out of the Corallian Limestone, a small corner of an arable field has been set aside by Manor Farm to allow the Wild Celery to regenerate.

Although much Iron Age, Roman and Anglo Saxon pottery has been found at the Frilford temple site, the oldest sherd found in the village of Marcham itself was part of a Norman pot from Hyde Farm. Marcham is mentioned in Domesday Book and is known to have been a village from before 8th century.

There have been many finds from different historical periods at Trendles including this enamelled Roman brooch.

As well as a representation of the football shield this commemorates that the sign is on the position where one of the old goals used to be, before the pitch was moved to its present position.

For many years The Marcham Players used to perform in the Institute, as well as other locations in the village, and we hope that in future years a new drama group will make use of the new facilities.

Marcham's Rainbows, Brownies and Guides are represented by this stylised trefoil. There has been a Guide unit in the village on and off since 1925 and continues to feature prominently in the life of the village. Girlguiding continues to give Marcham's girls "the best experiences".

The Scouting Organisation has been represented in the village by the Cubs for over 50 years now. Run by wonderful volunteers, the pack started out in the school and then moved to The Institute. In 1990 a purpose built cabin was erected, by the cubs, where the new hall stands today. Their symbol of the fleur de lys represents the three points of the Scout Promise.

Under S106 of the Town and Country Planning Act 1990, contributions can be sought from developers towards the costs of providing community and social infrastructure, the need for which has arisen as a result of a new development taking place. This funding is commonly known as 'Section 106'.

In this case, Marcham Community Group applied for S106 money which has been paid by local developers specifically for art projects. The Vale of the White Horse D.C. holds these funds for local use and awarded a grant to Marcham for the artwork at the Marcham Centre.

For more information on S106 go to whitehorsedc.gov.uk

Suzanne O'Driscoll studied Painting in London, at the Central School of Art and as a postgraduate at the Slade School of Fine Art. Her work has been influenced by travel giving her a wide range of source material. Her interest in strong colour began in her early work with travel to South America. Researching collecting and piecing together visual imagery is part of her working process.

In mid career Suzanne began working in metal, using her drawings to inspire many large scale sculptures. She has gained a reputation in this area, working on a number of varied, and often challenging public art commissions. Suzanne works closely with her team of fabricators, engineers, lighting consultants and other experts. She sees a project through all the development stages, from initial ideas to final installation. Originally growing up in Oxfordshire Suzanne moved back to the county, and her latest studio is in Bladon, near Woodstock.

Suzanne really enjoyed working on this new project at the Marcham Centre and creating the artworks for the community of Marcham. 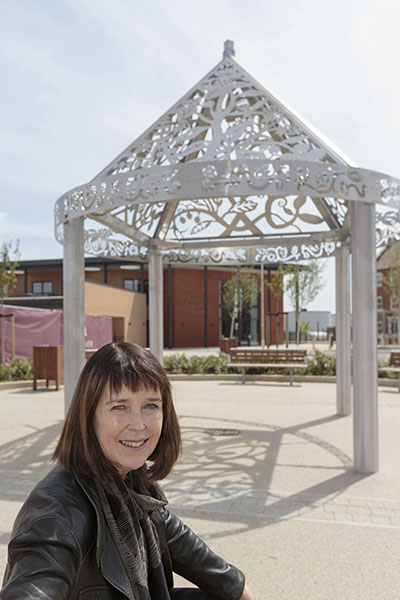 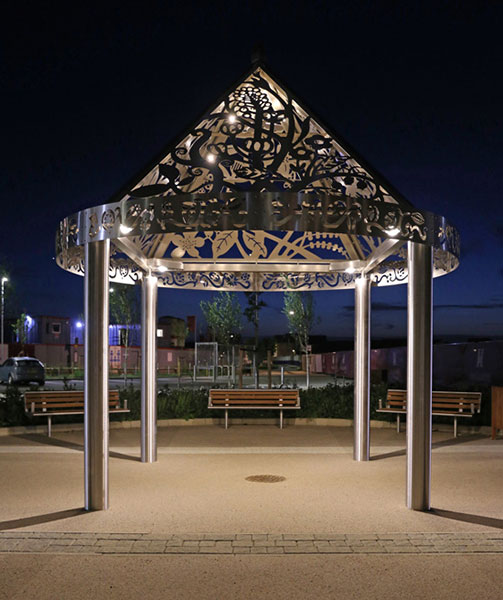 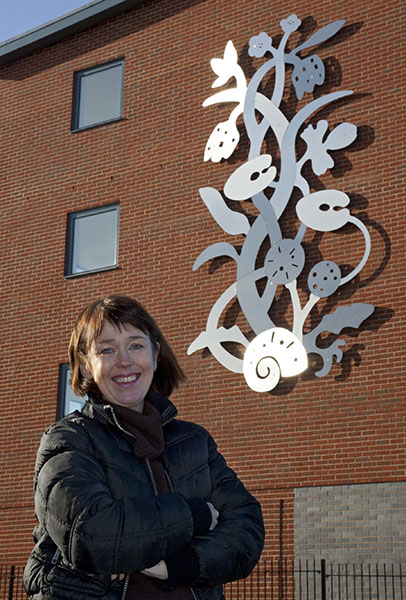 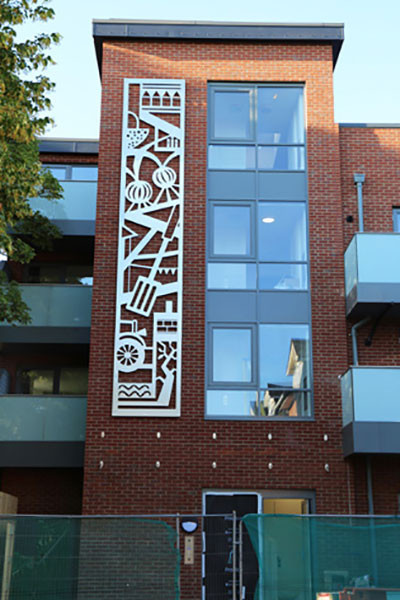 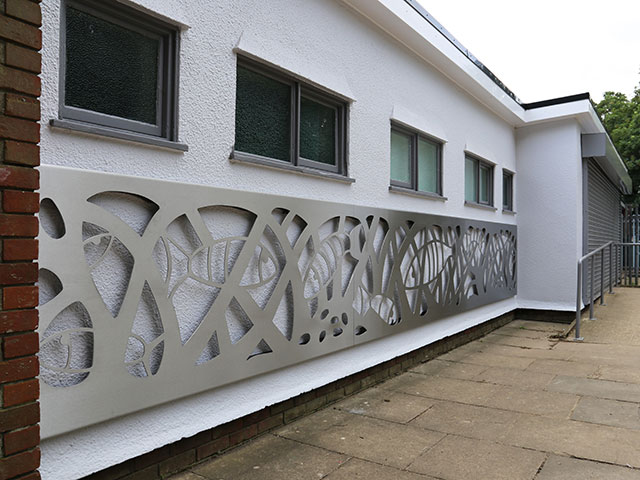 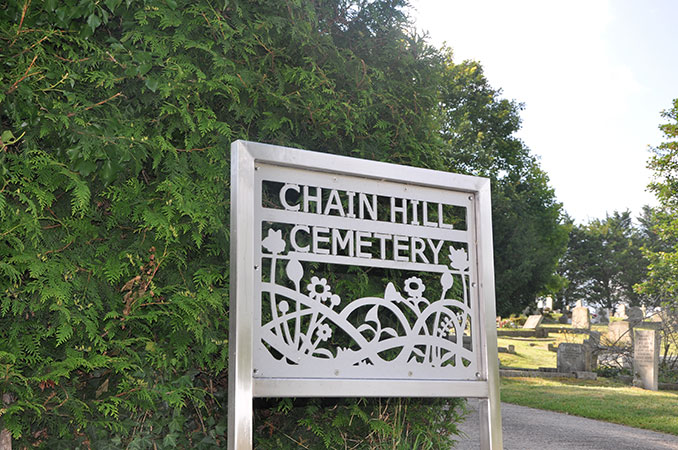